Menu
Install the app
Welcome to SkydioPilots.com
Sign up and join the discussion!
Sign up
You are using an out of date browser. It may not display this or other websites correctly.
You should upgrade or use an alternative browser.

Some of you may remember that back in December I posted some pics from my replacement S2 and I was saying I didn't think the HDR settings were right. That was right before my Mavic, that I sent up to take some comparison shots, went into a tree. Well, that totally distracted me, and then the weather did too.

Sooo, here we are, about 3 months later and I have a trip coming up and thought I'd better get S2 tuned up. Went out flew it around a little, looked at the footage and remembered about the issue cuz it was too saturated. Now I've spent a couple hours getting imagery and trying to be able to show Skydio whats wrong, which I just did via email. So, now I'm posting it here to see if others have noticed the same thing? Is your imagery HDR on vs HDR off definitely different??

Remember, with my first S2, there was a distinct difference between imagery HDR on vs HDR off. Now, I can't hardly tell them apart and they both suck compared to what real life looks like. Sure, nice and enhanced, if I want em that way I'll make em that way in post. I've tried numerous subjects to illustrate the point...the sky works best cuz I can shoot phone pic from same viewpoint.

Heres what I'm talking about.

This is a pic from my phone. Its what it looks like to my eye too: 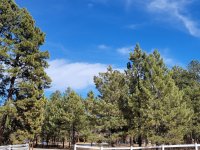 Here is from S2, HDR off. The blue is far too deep and there is a reddish tinge to the wispy clouds: 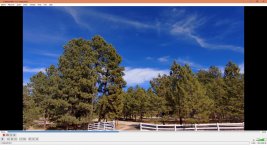 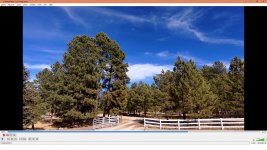 Yes, I had an ND8 filter on S2. I removed it and did the shots again. The results are actually slightly different, but also not real. With HDR off, the wispy clouds are whiter than they are with HDR on. Its the best alternative, but its not right either. Here it is (no ND8, HDR off, 4k, 60fps, the rest on auto): (for easiest comparison of the blues, look at the thumbnails where the pics are side by side. 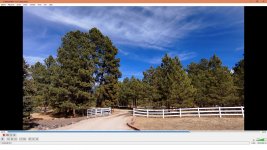 Hasn't anyone compared HDR to No HDR? Results??

Did more testing. Decided that, absent No HDR being different than HDR on THIS drone, the most realistic settings for use here is No HDR, +.5 EV, the rest on auto. Shooting in 4k @ 60 FPS. Will re-run the comparisons (a couple) once I get to my destination.

This while issue came up last December on maiden test tracking flight when the ground was waaay excessively saturated in red. That was with No HDR. I didn't know it till I came home and looked at the footage. To my eye, its nowhere near like what the drone's footage showed.

Note, you can't change (or I can't anyway) any of the camera settings in HDR, not even EV. I assume thats how everyone else's drone is too?
Toggle signature
YouTube: ADV-dmac
D

Not sure if they fixed this in S2+, but S2 has pseudo HDR. If you download video to the PC and open in VLC player or ffmpeg, you will see that it’s ain't HDR at all, it’s encoded in generic SDR color space. I have reached out to Skydio but they declined to comment this lie.

Dilan said:
Not sure if they fixed this in S2+, but S2 has pseudo HDR. If you download video to the PC and open in VLC player or ffmpeg, you will see that it’s ain't HDR at all, it’s encoded in generic SDR color space. I have reached out to Skydio but they declined to comment this lie.
Click to expand...

Can you please clarify what you are looking at that is indicating that 'it ain't HDR at all'?

I always use VLC to review my vids and the codec info is the same for each, but what indicates whether its real HDR or pseudo HDR? See below.

Skydio's response to my inquiry about why my replacement S2 is different from my original S2 was that the imagery I sent them didn't have sufficient contrast to facilitate an evaluation. I gave up and just decided to fix things in post if I feel the need. 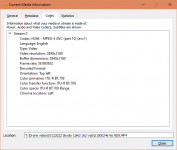 Color primaries BT.709.
And when I process it in Final cut pro, I have to convert it to 2020 and manipulate things back n forth with hdr filters so exported video somehow reminds of legit hdr. Again, this is purely firmware limitation, not hardware, and skydio is being quite ignorant for years about it. I was fighting with them for a while, because I use drone for video production.
You must log in or register to reply here.

X2 for SAR and other public safety uses