You are using an out of date browser. It may not display this or other websites correctly.
You should upgrade or use an alternative browser.

As some of you know, I do a lot of filming off motorcycles and carrying a drone along can be problematic. Skydio suggested this setup. @ $129 I wasn't impressed. Back when I was testing the SD2 I used a Klim NAC Pac back and liked the way it held the drone. I've used klim packs for years and like them for their versatility, KLIM is known for making high end snowmobiling and motorcycling gear and has a rep for quality stuff (no affiliation).

Fast forward 2 months and I wanted to update my setup. Did a lot of looking around and realized that to carry the drone and water along would require that the drone be stored in the same compartment as the water bladder. There's some exceptions but I didn't see any I liked. I decided to get the updated Klim Nac Pac which had a couple features that lent themselves to the SD2.

Here's a picture of the SD2 inserted into Klim's newest NAC Pac. You can see it slides down nicely between the removable tool pack and the main compartment. No need to unzip the backpack to get the drone out. The way the backpack is designed there's a pocket between the outer compartment and the main area of the backpack with mesh on the sides. The SD2 case's width is correct, just wide enough to fit down in that pocket snugly w/o being too difficult to remove. The 2 straps used to hold on the removable tool pouch clip over the SD2's case capturing it in the pocket.

There's multiple zippered pockets, a rear outer pocket that works well for sunglasses, ball cap, leatherman etc... it's the area where you see Klim spelled out.

Right in back of that is a removable zippered tool pouch that can be used or not. It's nice to have with elastic straps to keep the tools organized.

Above that is a zippered goggle pouch made out of similar material as the SD2's case. What's nice about this pocket is it holds 2 batteries nicely with enough room to buffer them with something like the cloth drawstring crown royal pouches, considering that the SD2's case also holds 2 batteries I can ride out knowing I have 120min of filming.

The zipper across the top and back is the main compartment, typical size with plenty of room for a 3L water bladder, rain shell snacks and other typical backpack things.

Another cool feature is the shoulder straps. They clip together with a quick clasp. Klim incorporated 2 small zippered pockets in lower front of the straps. For me, one will hold the beacon and the other will carry SD cards and GoPro batteries. 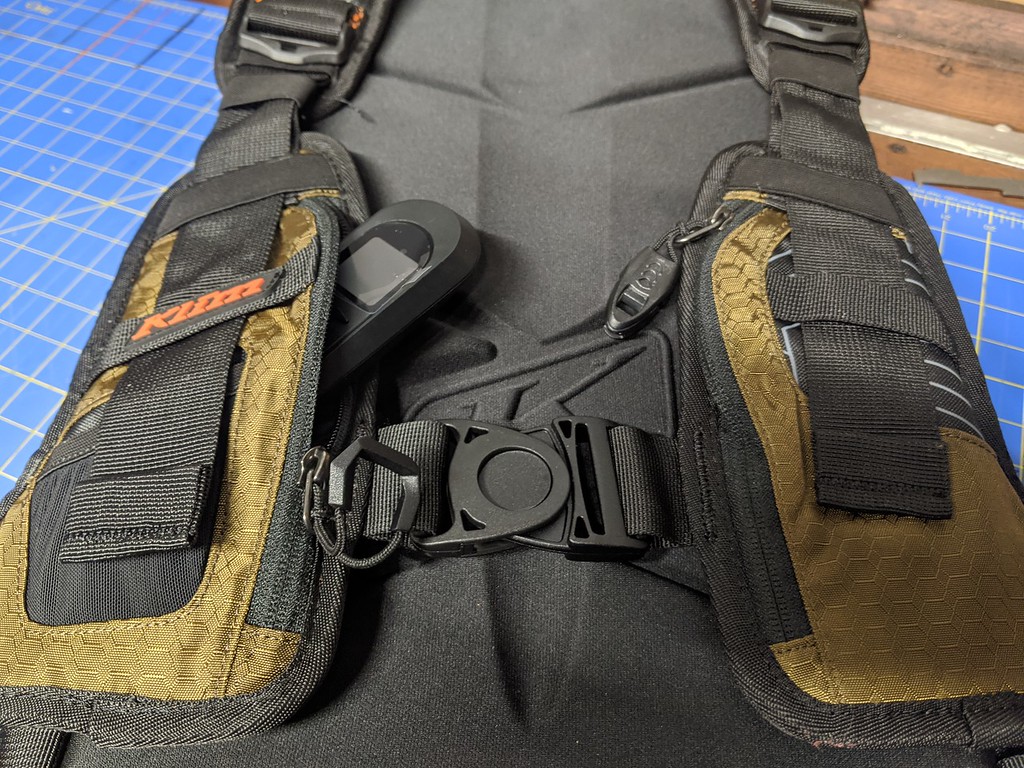 Here's a side pic showing the SD2 case in the backpack.

Most of you won't have a need for this kind of setup but if you're hiking, mtn biking or riding motorcycles I think it would serve you well. @ $99 is a bit cheaper then the one recommended by SD.
Toggle signature
RidefreakTV
youtube.com/c/RideFreak
Reactions: GarthH
W

Thanks for sharing RF,

That’s an exceptional piece of carrying equipment, Plenty of room. I’m going to order this same one, it’s definitely better than what I’m using.

I use a back pack for two different hobbies, and usually carry more than one quad. Plus, carry a high end metal detector broke down to fit inside pack along with the quads. Metal detecting long lost settlements, 1780 to 1875 era settlements on farm or cattle land. Plus, use high end quads searching for signs of these lost settlements.

You definitely take this hobby and video making to the next level, great job! Same here, Using high end drones has enabled me to locate settlements within hours by air that would have taken me years to locate by foot.

Just to add a note to this post, on the 4th picture down if you look at the RH (when wearing it) strap, there's a small mesh pocket barely noticeable under the strap hanging down. THis turns out to be perfect to slide the beacon in when you need quick access to it when the drone is in the air. I attached a short strap to the beacon that clips onto adjacent to the pocket. When the beacon isn't needed it also can be placed in the zippered pocket just behind the mesh pocket so 2 ways to hold the beacon depending on if your flying or not. The setup worked really well.
Toggle signature
RidefreakTV
youtube.com/c/RideFreak
Reactions: Trailryder42
You must log in or register to reply here.

Is my Beacon finally dead?

Rules when transporting on a plane?